Update: After about a week, HughesNet pushed out a potential fix to my specific modem. Although I don’t know exactly what bits got flipped, the problem is now solved, and the fix will be pushed out to other subscribers’ modems in the future. Thank you, HughesNet!

This post is for the benefit of HughesNet tech support/engineering personnel. These are my troubleshooting notes.

Large (>1MB) downloads have been failing for me on certain URLs, although smaller downloads fail as well. HTTPS fails more than HTTP. This has been happening for at least a month. Other users are reporting the same issue.

A third, that occasionally produces the problem, is an HTTP download:

Occasionally, GitHub repos will fail to fetch for the same reason. This is particularly annoying because Git offers no way to resume a partially-fetched repository.

This Git repo is known to do so when cloned using HTTPS or using the Git protocol:

IPv4 and IPv6 connections are both susceptible to failure.

The HTTPS downloads fail whether Web Acceleration is enabled or not.

HughesNet alters TCP packets mid-flight. :( You can see this in the packet captures above. Something between my client and the server has taken upon itself to act as a TCP endpoint. Not nice. 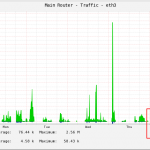 END_OF_DOCUMENT_TOKEN_TO_BE_REPLACED

I created a new webpage for QuotaMonitor, a small Linux taskbar app to monitor data usage on the HughesNet HT1000 and HN9000 modems.

Version 1.4 has been uploaded. Thanks to the work of capnchaos64 at the dslreports.com forums, the applet now can display the raw data being parsed from the modem as well as some HN9000-specific information. It also can reboot the modem now.